(Posted with permission from Fear of Landing;  https://fearoflanding.com/)

Malaysia Airlines flight 370 has been in the headlines again and for the first time in quite a while, I’d like to talk about the real news behind the news. Some of the mainstream papers have been less than clear about what the new data is, let alone its importance. Also, somewhat frustratingly, the key question that I have doesn’t appear to have been asked.

I’ve not been saying much on the subject of Malaysia Airlines flight 370 for two reasons. One is that a lot of the “news” has been speculation and/or accusations rather than fact, outbursts based on frustration and conspiracy theories based on the idea that someone does not want the world to discover the truth. The second is that searching for aircraft is something I know relatively little about, let alone satellite technology and drift analysis, so I don’t feel that there’s a lot of value in weighing in on news to do with the search parameters. In terms of what happened on board the aircraft, well, little has changed since my original collection of theories and possibilities.

There have been changes to the airline industry. All commercial aircraft travelling over open water now report their position every 15 minutes. Inmarsat now offer free tracking services to all commercial airliners and the handshakes now take place every 15 minutes instead of once an hour. From 2020, newly manufactured aircraft will be required to include a means to recover flight recorders (or their data) before the recorders sink, for example using the same automatic ejection as military aircraft use or offloading the data to the nearest station, although this remains a complicated issue. By 2021, all new aircraft are expected to include autonomous tracking devices which will report as often as every minute in distress situations, as well as cockpit voice recorders capturing an entire flight rather than just the 30 minutes to two hours which are common now.

The search for the aircraft has been the most expensive search operation ever. In January 2017, the official large-scale search for the wreckage of Malaysia Airlines flight 370 was suspended, with costs reported between US$135 million to $160 million. Malaysia’s Transport Minister said earlier this year that they estimated the cost at US$112.5 million.

Despite every effort using the best science available, cutting edge technology, as well as modelling and advice from highly skilled professionals who are the best in their field, unfortunately, the search has not been able to locate the aircraft. Accordingly, the underwater search for MH370 has been suspended.

And that would would seem to be that, until the Malaysian Joint Investigation Team release their final report, promised by the end of 2017.

However, the latest reports from the ATSB (Australian Transport Safety Bureau) have been all over the news and rightly so, because they offer key information which might help us narrow down the location of the aircraft impact. The issue has been throughout that the search area is is impossibly large and impossibly deep, so the chances of us ‘stumbling’ upon the wreckage has been slim.

The first is Geoscience Australia’s report, Summary of imagery analyses for non-natural objects in support of the search for Flight MH370, which analyses four satellite images taken by CNES (French space agency) satellite PLEIADES 1A on the 23rd of March. The question is whether these four satellite images, taken just west of the 7th arc, show man-made debris and if so, whether they could be the wreckage of Malaysia Airlines flight 370.

The analysis classified 12 objects as “probably man-made”, from a total of 70 detected objects. Each object was categorised in one of five classes of likelihood of being man-made in origin.

The majority (36 of 70) of all detected objects were found in the north-easterly image (PHR_4). PHR_4 also contained 9 of the 12 objects classified as “probably man made”.

This analysis indicates a probable cluster of man-made objects in the north-easterly image (PHR_4) on March 23 2014 but cannot determine whether they are aircraft debris.

So basically, the images taken just two weeks after the loss of Malaysian Airlines flight 370 show objects on the water in an area which could be close to where the aircraft impacted the Indian Ocean. There is a cluster of objects which are likely to be man-made debris but it is not possible to determine whether the objects are from an aircraft.

If it could be proved that the objects are aircraft wreckage, then it would be highly likely that it was the debris of Malaysian Airlines flight 370, based on the timing and location of the satellite photographs.

The second is CSIRO’s report, The search for MH370 and ocean surface drift – Part III , which focuses on one complex question.

If at least some objects in the images are pieces of 9M-MRO, from where did they drift in the weeks between the disappearance of the aircraft and image capture?

If the debris on the satellite images actually was from the missing Boeing 777, then tracking the likely route from the 8th of March to the 23rd of March is a helluva lot simpler. 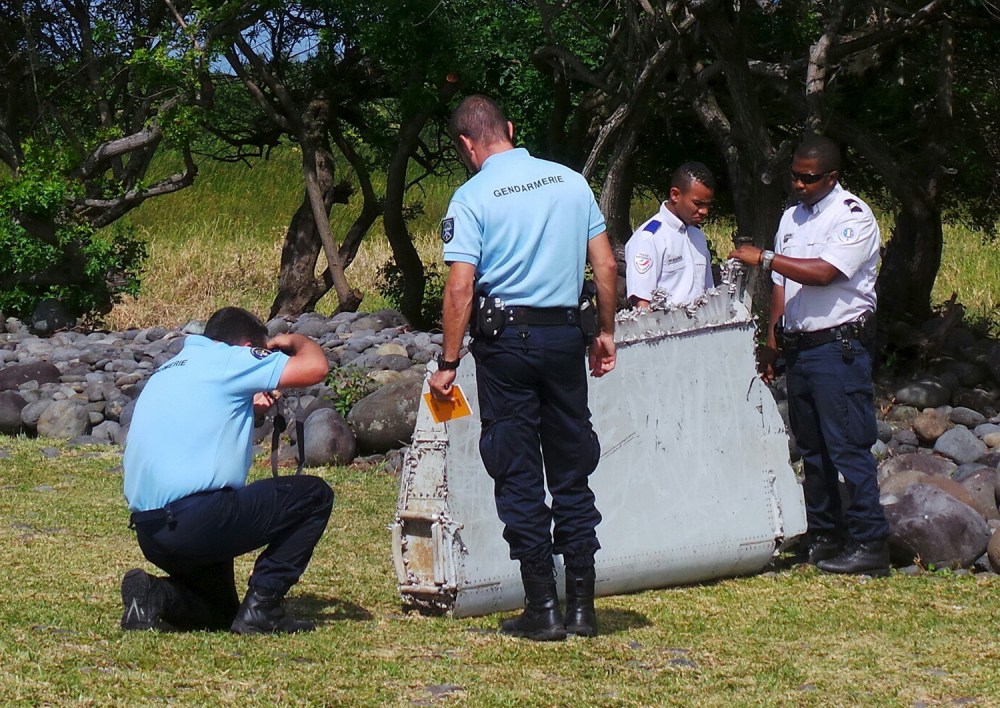 The results of five months of research? Phenomenal.

Taking drift model uncertainty into account, we have found that the objects identified in most of the images can be associated with a single location within the previously-identified region suggested by other lines of evidence. Furthermore, we think it is possible to identify a most-likely location of the aircraft, with unprecedented precision and certainty. This location is 35.6°S, 92.8°E.

It’s really exciting news. If the objects seen on the satellite images are man-made objects (probable) and if those objects turn out to be aircraft debris (possible), then we have the first piece of solid evidence which would help us discover where Malaysia Airlines flight 370 crashed into the ocean.

But there’s a lot of ifs there. And contrary to some media reports showing a pin stuck in a map, the location is not exact. It is a reduced area of “only” 5,000 square kilometres / 1,900 square miles: a search area the size of Grand Canyon National Park. Worse, that’s an approximate area; the CSIRO report admits that the actual revised search area could be as big as 25,000 square kilometres.

It’s not really a surprise that the ATSB accompanied these reports with a plea for caution, as more conclusive evidence is needed to be confident of the reduced search area. The Malaysian transport minister has stated that they are waiting for more data before considering the possibility of further searching.

However, the release of the detailed reports and the reduced search area could also be useful to one of the private search parties which have sprung up with the intention of continuing the search. The Malaysian Department of Civil Aviation has said that they are assessing proposals for private searchers. At this stage, I think it’s questionable whether any of the interested parties have the funds to carry out an intensive search without government support.

DCA director-general Datuk Azharuddin Abdul Rahman, who is also the head of the MH370 response team, confirmed receiving “several proposals” from parties interested to search for MH370, missing with all 239 people on board since March 8, 2014.

“While the report presented a thorough analysis of the refined MH370 ocean drift pattern based on available information and satellite images, we remain to be guided as to how this can be used to assist us in identifying the specific location of the aircraft,” Azharuddin said in a statement.

A further question is why these satellite images weren’t analysed earlier. The media reports that the images taken by a French Military satellite had been submitted at the time but “discarded by authorities” before the ATSB became involved in the search. This doesn’t really answer the question and I’ve yet to find any reliable report explaining why the images were discarded and what caused them to be picked up again in March of this year.

From a personal point of view, I’m hopeful that this news will encourage further research to prove or disprove the reduced area, which in turn could increase the confidence level of a reduced search area. And it would be particularly ironic if Airbus satellites provided the final clue required to discover the missing Boeing 777.