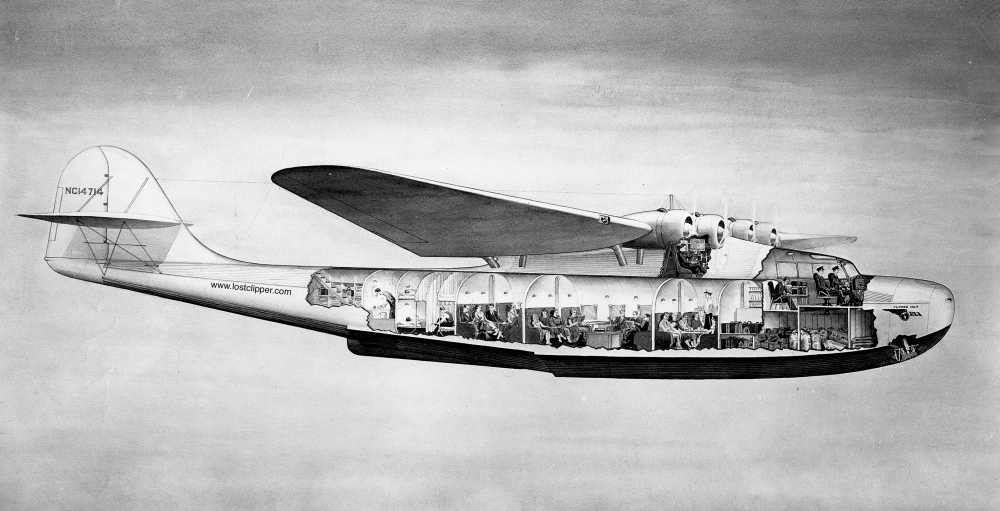 Because it comes up from time to time, here is an original layout drawing of the Hawaii Clipper as part of its delivery package from the Glenn L. Martin Company to Pan Am Airways. Looks like a bit of a cramped trip when packed with passengers and crew, however, for trip #229, it only had nine crewmen:

Dr. Earl B. McKinley – Washington DC
Dr. McKinley was the President of the American Association of Pathologists and Bacteriologists.  He also served as the Dean of the College of Medicine at George Washington University and had been a Professor of Bacteriology at the college since 1931. Widely recognized throughout the world as an expert on leprosy Dr. McKinley had studied this disease in the Philippines, where he was the field director for the Rockefeller Foundation and had served as a member of the Governor General’s Advisory Committee on Leprosy. On board the Hawaii Clipper with McKinley were two newly developed serums to test on 250 lepers in the Philippines to compact the disease.  McKinley’s contributions were also evident at Columbia University, The School of Tropical Medicine in Puerto Rico, The Washington Academy of Medicine Baylor University.  Prior to being a highly respected educator, McKinley was a front lines officer in World War One.  He was 43 at the time of his disappearance.

Dr. Fred C. Meier – Washington DC
A botanist, and plant pathologist with the Department of Agriculture. In 1937, Mr. Meier arranged Amelia Earhart to have Fred Noonan use an air-hook, which had been developed by Dr. Meier and Charles Lindbergh to collect airborne dust, pollen, spores and disease germs at attainable altitudes. Fred Noonan had taken such samples over the Atlantic portion of the flight around the world and Mr. Meier had been able to establish with the samples sent back by Amelia Earhart that at least forty micro-organisms, plant and disease, were being carried across the Atlantic on the upper air currents. Mr. Meier had hoped to prove the same with the Pacific leg of the flight but as we all know never received the samples.

Edward E. Wyman – Bronxville, NY
Mr. Wyman was the former assistant to Pan American Airways President, Juan Trippe and was hired on June 3, 1938 as Vice President of Export Sales for the Curtiss-Wright Corporation (new fighter aircraft division). Wyman graduated from Yale in 1918 and became  a World War One pilot who still retained the rank of Lieutenant Commander in the US Navy Reserves.  After the war, he pursued a career in industrial mechanization having worked with Mack Truck Corporation for nine years.  Having risen to National Sales Manager for Mack, he left to join Pan Am Airways where he stayed for ten years assisting Juan Trippe build his airline empire.  Mr. Wyman was en-route to China to conclude business with the Chinese that would enable them to buy and install engines for the new Curtiss Hawk 75-A fighters (P-36) that china had bought to replace the Hawk 75 currently in service (cost of 50 fighters valued at 3 million dollars). Wyman was also a Lt. Commander in the USNR.  Wyman was 45 at the time of his loss.

Kenneth A Kennedy – Palo Alto CA
Mr. Kennedy was the traffic manager for PAA’s Pacific Division, and was en route to the Orient on company business, possibly to reschedule the connections with CNAC (China National Aviation Corporation), which had been disrupted as the result of recent Japanese military advances.  Prior to joining Pan Am Airways, Kennedy served United Airlines while living with his family in Denver Colorado.   This location was purely strategic as he was heavily involved in the purchase and organizing of the airlines transcontinental flights from Chicago to California.  The Hawaii Clipper incident was not his first as he had survived a serious aircraft accident near Park City Utah.  The Kennedy’s put down deep roots in Colorado as he belonged to University of Colorado’s Alpha Tau Omega and his wife to become a Pi Beta Phi housemother and eventual staffer at the CU chapter.  K.A. Kenedy himself was an Alumni President of CU in 1914 and lead the efforts to construct the first University Memorial Union Building, was an assistant manager for the football team and manager his senior year.

Howard C. French – Portland OR
Major Howard French was the active commander of the 321st Observation Squadron at Pearson Field in Vancouver Washington state which flew Douglas O-38 biplane reconnaissance aircraft.   In addition to his military duties, he also acted as the Oregon state aeronautics inspector under Governor Julius Meier and was the Vice President of the Oregon Aero Club.  French previously served in the Mexican American War and was shot down twice while with the 5oth air squadron in World War I.   Aviator stationed at Pearson Field and worked in auto sales and a building contractor in Tacoma.  At the time of his loss, he was en route to China and had stated to a reporter from the Oregonian before his departure that he would be making his way to Canton China to observe Japanese aircraft bombing methods.   French was single and lived with both his mother and sister.

Watson was a very savvy entrepreneur. He had emigrated from China for the same reason as most immigrants; to take advantage of perceived opportunities a growing nation had to offer.   Unfortunately, the opportunities facing the new immigrant were limited and often selected based upon ones race. In the early days of the 20th century, Chinese migrants had few choices for employment and were relegated to working on railroad construction, laundries or restaurants. It was the latter that the young Wah Sun, or known later by his Romanized name “Watson,” would choose and eventually be very successful.

From his initial arrival on the East coast of the United States, Watson must have pondered what realistic opportunities were available in a land where racism and bigotry were almost at their near height. In the early days, cooking food or doing laundry seemed to be the profession selected for Orientals.   The outright discrimination stemmed from earlier national practices like the US Congress’s Chinese Exclusion Act and the Geary Act. Both legislations outlawed any Chinese from migrating to the US (the only time a law was used to single out a particular race to prevent immigration) and significantly contributed to a national bias. However, Choy was able to successfully navigate the obstacles placed before him and navigate a path to open three dining establishments in New Jersey and New York.

National newspapers stated he was a Jersey City Chinese restaurateur who was carrying a large sum of money for the “Chinese nationalist cause”, something that would probably should not have been widely circulated given the war between China and Japan and the plight of most peoples poor financial prospects at the time.  He was 37 when he was lost.

Passengers NOT aboard the flight, having disembarked after the first stop over in Honolulu were: