At first glance, one might wonder “how did the Lost Clipper crew get “the” Amelia Earhart to join their team? Wasn’t she lost somewhere over the Pacific over 80 years ago?”

On the contrary. Amelia Earhart is alive and well…

Named by the Jaycees as one of the “Top Ten Young Americans,” Amelia Rose Earhart recreated and symbolically completed the 1937 flight of her namesake, Amelia Mary Earhart. Her 28,000 mile flight around the world in a single engine aircraft, the Pilatus PC-12NG, became a symbol of determination, courage and empowerment for anyone who has ever decided to seek new horizons.

As a child, Amelia’s family shared stories of a distant common relation to the first Amelia Mary Earhart, exciting her passion to learn anything and everything she could about the aviatrix’s adventurous spirit. When Amelia Rose began her own search to determine her exact connection to the famous flyer, she learned that a distant relation to Amelia was tied to the 1700’s, however a third and final search revealed that there was no definitive connection between the two women. The modern day Amelia, an instrument and commercially rated pilot, decided that she didn’t need to be connected to her namesake by a bloodline relation in order to make her impact on the world. She decided that if she wanted to be related to Amelia, she would relate to the way she lived her life: with passion, conviction, and tenacity for exploration and adventure, which meant her flight around the world was a success.

Every major news network tracked Amelia’s 2014 flight through fourteen countries, over the course of 18 days, and 108.6 flight hours. The mission included a flyover at Howland Island, the tiny island atoll where Amelia Mary planned on landing after her departure from Papua New Guinea. As she flew over the South Pacific Ocean, Amelia used Twitter to announce the names of ten female high school students who received flight training scholarships to obtain their private pilot’s license. 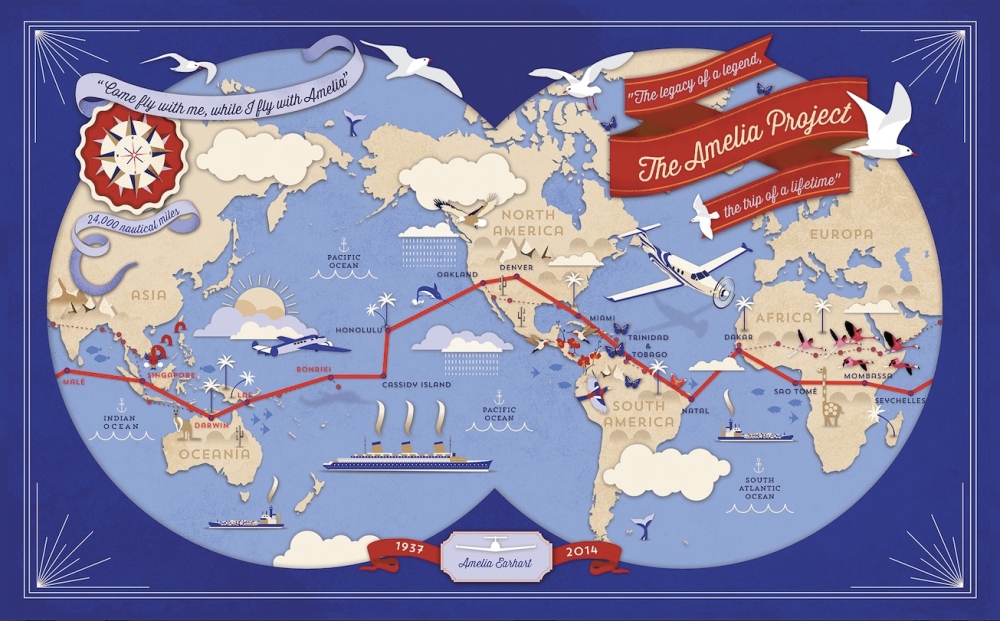 Amelia is the president of the Fly With Amelia Foundation, a non-profit providing flight training scholarships to young women across America. She can be seen each morning on Denver’s NBC affiliate, KUSA-TV reporting on breaking news and traffic, is an active member of the Board of Directors at Wings Over the Rockies, Colorado’s Official Air and Space Museum and is currently working toward her multi-engine aircraft rating. Amelia produces a weekly segment on STEM Education, which can be enjoyed each Friday on Denver’s NBC TV station, KUSA Channel 9.

Fortune 500 Companies, The United States Air Force Academy, dozens of Universities and Civic Organizations, just to name a few, have been impacted and thousands have been jolted awake by Amelia’s contagious enthusiasm for action, her raw and charming leadership style and her ability to take audiences along on their own flight around the world with her story.

We’re very excited to welcome fellow explorer Amelia Rose Earhart to The Lost Clipper effort! You can read more about Amelia on her website at www.flywithamelia.org